An Idea Is Turned into a Place
For the creation of the Schaulager building, the Laurenz Foundation turned to the architectural office of Herzog & de Meuron. In close cooperation with their clients, the architects developed a building typology that structurally implemented the progressive Schaulager concept: the combination of storage and exhibition space. Opened in 2003, Schaulager can be described as an architectural prototype. The innovative solutions and forms, both internally and externally, make this building on the outskirts of Basel an architectural highlight. 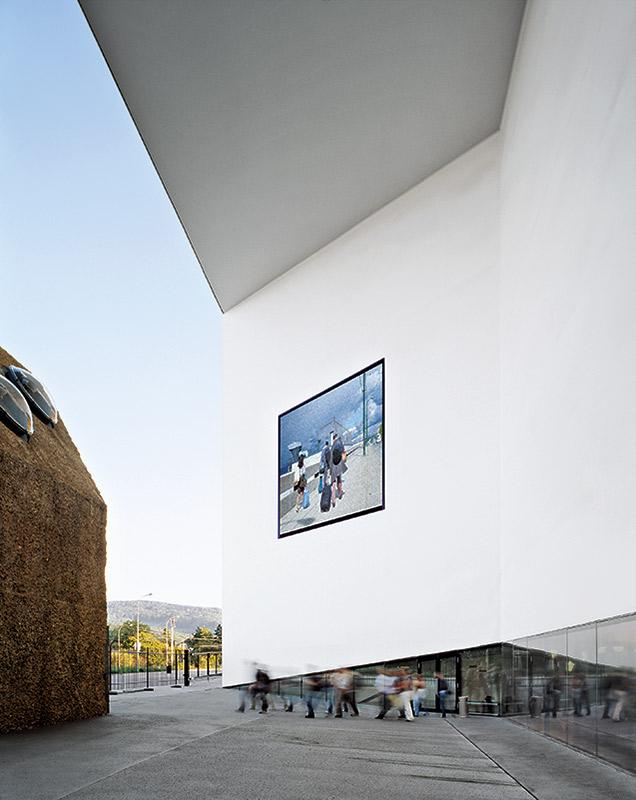 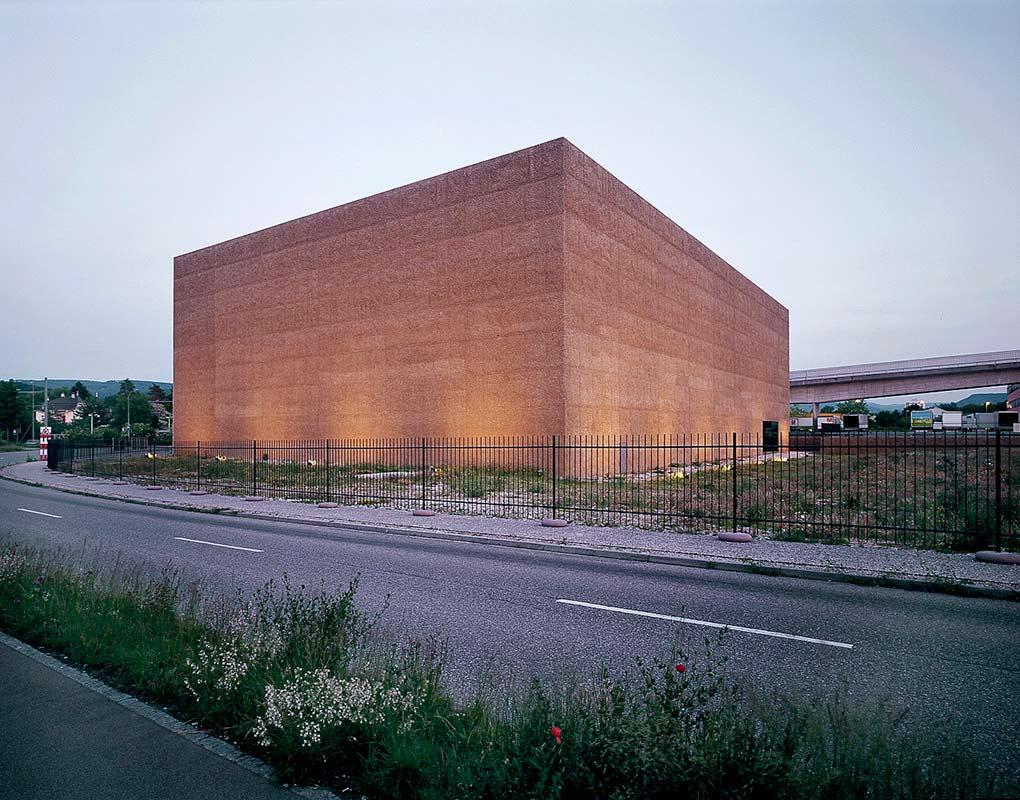 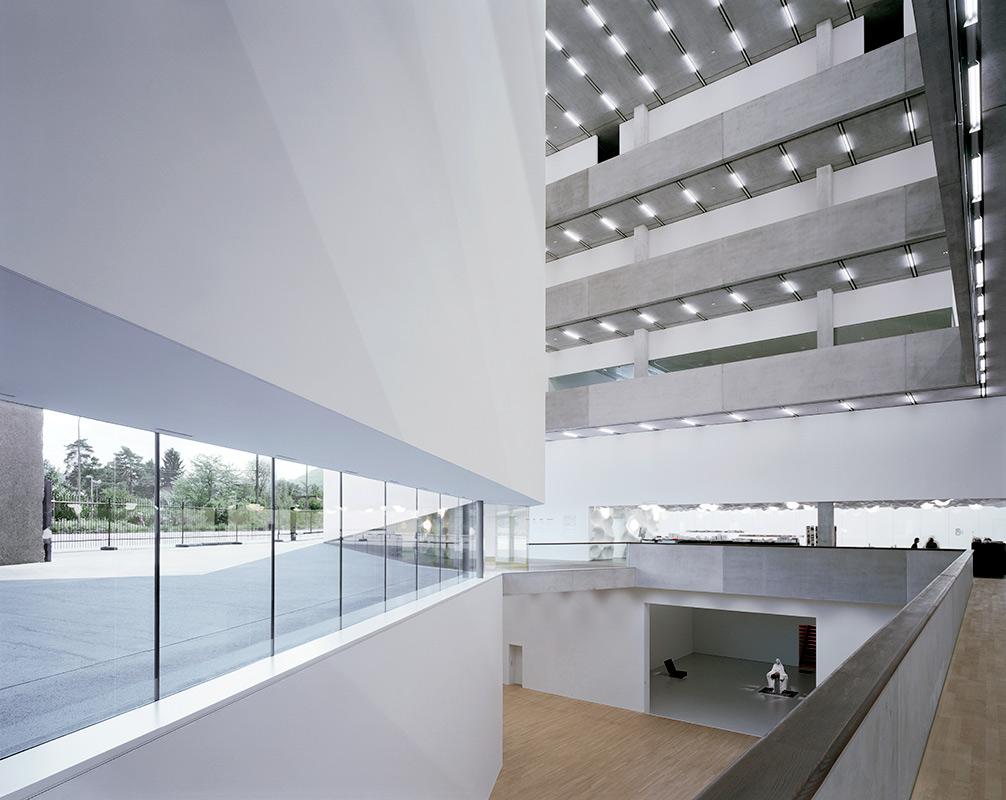 The art collection of the Emanuel Hoffmann Foundation has been housed and administered at Schaulager since 2003. In accordance with the Schaulager concept, the rooms are designed as spaces for both storage and display. Since the layout is modular, the rooms can be adapted to meet varying space requirements. Thus Schaulager does away with the traditional storage vault, replacing it with an idea of the store room as an autonomous facility: suitable for presenting art, yet distinct from an exhibition space in a museum or gallery. Here, artworks are stored under optimal conditions with regard to temperature and humidity, while remaining permanently accessible for study purposes. And, unlike in conventional storage situations, the physical condition of the works can be monitored and inspected at any time.

The combination of storage with display also gives rise to a new form of presentation. The works are visible, but installed closer together than in a typical exhibition setting. Each work is stored in such a way as to be accessible without difficulty. The manner of presentation respects the conditions of the work and is decided, where possible, in consultation with the artists concerned.

While the three upper storeys of the building are taken up by the collection of the Emanuel Hoffmann Foundation, the ground floor and basement house an exhibition space and visitors' area. In the entrance hall, the atrium, rising 28 metres to the ceiling, gives a complete view of all five floors. The exposed concrete and the linear arrangement of the lighting establish a visual connection between the storage and exhibition spaces. The individual floors are entirely supported by massive concrete pillars, which facilitates the flexible organisation of the storage spaces and makes it possible, in particular, to adapt the exhibition architecture to the requirements of each project, allowing for large-scale and site-specific presentations. In the basement, two rooms are given over to permanent installations: Rattenkönig [Rat-King] (1993), by Katharina Fritsch, and Untitled (1995–1997), by Robert Gober.

A glass wall separates the entrance area, with the cafeteria and bookstore, from the hall behind with the loading bay. Thus the processes of handling and transporting art, which in other art institutions generally remain unseen, become transparent for the visitor.

The 144-seat auditorium and two seminar rooms offer space for events such as lectures and workshops. The library, the reading room, and the archive are open on application to researchers.

The polygonal shape of the building's exterior is a pragmatic response to the shape of the site. With its solid, closed appearance, giving no outward indication of the division of the floors, the building has a protective air, evoking permanence and stability. Its clay-coloured surface discloses the pebbles, from the material excavated on site, that are mixed into the concrete. This effect was achieved by manually treating and hammering the soft concrete. The resultant characteristic appearance of the façade recalls processes of sedimentation, thereby emphasising the idea of Schaulager as a place where art is stored and conserved, but where new visions continually emerge from the foundations of the collection. In addition to their symbolic significance, the walls, with a thickness of over 50 centimetres, serve the practical function of maintaining a constant interior temperature of 20 degrees Celsius, with 50 percent humidity.

The porous, natural appearance of the façade also determined the forms of various elements inside the building. The window apertures in the office and workshop area create an animated landscape, preceding, as it were, the actual view. Their shape echoes the organic aspect of the façade. In fact, however, they were derived from experiments with a contorted copper tube, from which their flowing, three-dimensional structure was then calculated with digital tools. In the entrance hall, a long window, tapering to a sharp point, allows daylight into the exhibition area. Otherwise, the building is windowless, in accordance with temperature and conservation requirements. The biomorphic form of the outside wall is also repeated in the metal fittings on the doors and interior walls, the visually striking, cave-like reception area with the cafeteria, ticket desk and cloakroom, and the banisters in the auditorium.

The closed-off appearance of the building as a whole is counterpointed by the smooth white façade on the east side, with the crystalline form of the gatehouse. This creates an inviting entrance situation for visitors to the public areas of the institution – an impression reinforced by the two LED screens showing images of Schaulager and its interior, and drawing attention to exhibitions and particular works. The screens also lend an urban character to the roofed forecourt.

Since 2015, the Schaulager has been generating electricity, with a photovoltaic power plant mounted on the roof. The energy cells, covering an area of 2300 square metres, have a peak output of 360 kW.

Schaulager is located outside the centre of Basel, in the immediate vicinity of a new cultural district with workshops and studios, service businesses, storehouses and exhibition spaces. The Academy of Art and Design is also housed in the new quarter, which occupies a former industrial estate, the Dreispitz area on the southern outskirts of Basel. This choice of site for Schaulager has influenced the redevelopment process in Dreispitz, providing the impetus for the transformation of a purely industrial zone into a dynamic neighbourhood.